Business areas, lots and premises in the Tampere city region 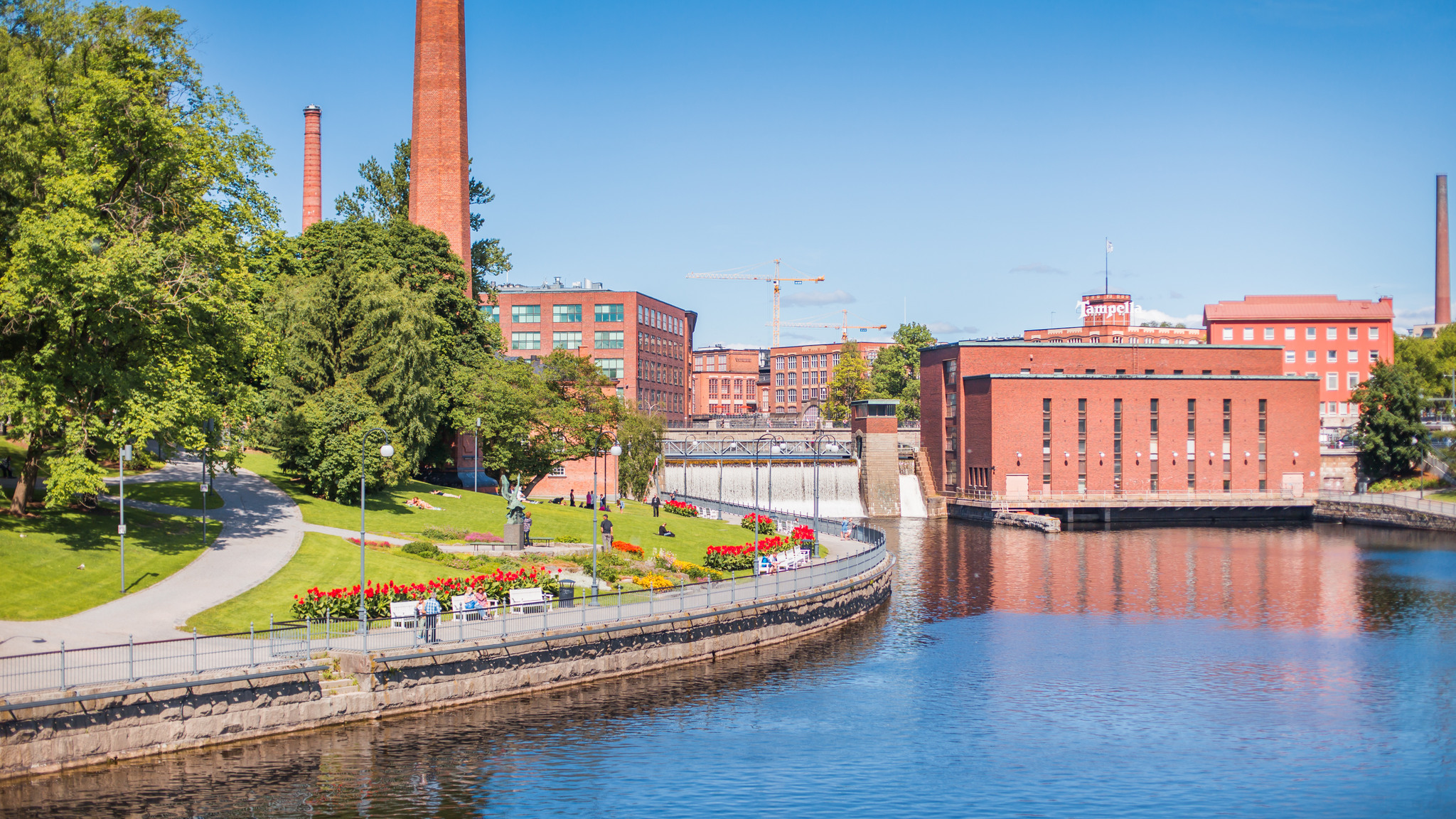 Tampere is a dynamic supra-provincial centre with more than 240,000 inhabitants, and also the centre of the Tampere Region. Tampere has succeeded in regenerating itself from the realm of heavy industry into a modern locomotive of high technology.

The city’s image as the most popular Finnish city people want to move to and as a student city further strengthens its growth and secures the availability of skilled manpower in the long run.

More information about the business sites in Tampere:

The Tampere city centre is being developed as an attractive and dynamic supra-provincial centre and as the locomotive of the entire Tampere Region, while taking into account the historical value of the traditional historical buildings that are of part of the national cultural environment. Tampere actively develops its city centre as a living hub of diverse housing, commerce and specialised retail operation and a growing centre of know-how and data intensive businesses, culture and events. The city of Tampere is the calling card for the entire region.

Development targets aimed at creating new jobs and enhancing services in the city centre include the area surrounding Ratapihankatu, Tampere Central Arena, Tampere Deck, Station Centre and the Ratina area. The goal is to enliven the city structure around the railway and promote the city image while also adding to the pedestrian and cycling routes between the city centre and the east and west parts of the city. The role of Tampere Railway Station as a regional and national central station for various forms of traffic will be highlighted in the future.

The city plans for the areas of Ratina, around the railway station and the university and Santalahti have been partly confirmed and are partly underway, and a total of 200,000 m² of new office and business premises are included in the plans.

80% of the entire operations of the Tampere Region Hospital District area conducted at the Tampere University Hospital, which specialises in 34 different fields of medicine. The central hospital has space for more than 1,000 patients and employs more than 3,000 people. Tampere University of Applied Sciences educates approximately 8,000 students a year at its Teiskontie premises, and about 3,000 of them attend classes on a daily basis. It is estimated that 5,700 students visit the Kauppi Campus on a daily basis during term. Tampere University of Applied Sciences employs about 650 people. All in all, the Kauppi Campus employs about 8,200 people. The number of clients that visit the Campus on a daily basis is 7,500. Technopolis Finnmedi offers business premises in the Kauppi Campus, and their premises are home to Tampere Eye Clinic and the Norlandia Care Tampere Hotel.

The Kauppi Campus also has about 180,000 m² of permitted building volume yet to be constructed for operations supporting the functions of the area. City plans underway also include a further 300,000 m² of building rights for various landowners in the area.

Lahdesjärvi-Lakalaiva is a highly visible and easily accessible business area in the intersection of highways 3 and 9. At the moment, business operations in the area are focused on production and logistics. In the future, it will become a more commercial area. A partial disposition plan is being drawn up for the area, and this will lead to a significant part of the production area being transformed into a large-scale retail area. During 2010, an Ikea store was opened in the area and in the coming years this will also bring other stores specialising in construction, home electronics and furnishing. The area covers 170 hectares and some 110 companies are located there.

A new business area is to be constructed in the southern part of the district that will cover approx. 20 hectares with 100,000 m² of business space intended mostly for large-scale retail operations.

Lielahti is one of the most significant commercial hubs in the Tampere Region. The most prominent furniture, hardware, home electronics and sportswear chains are represented in the area. The area also includes a business cluster of construction companies, plant hire, construction material wholesale and retail, and other companies catering to the construction industry. In the near future, the area will be developed more towards commerce. The area covers 90 hectares and some 130 companies are located there.

The Messukylä–Hankkio area is a traditional production area that also has material trade supporting production.

Rusko is a business area for industrial production and logistics and has excellent accessibility. The area is home to several construction companies and the proximity of the Technical University and the University of Applied Sciences make it a convenient location for many technical production plants, development centres and their subcontractors. The logistical location of the area will improve once the new road is completed, and this will also allow for the area to be extended by some 23 hectares.

New plots will be parcelled along Ruskontie and Kauhakorvenkatu. Enquire after available plots and business premises.

Sarankulma is a multi-faceted business area with an excellent location from the viewpoint of logistics.

A developing business area on the northeast side of Tampere. The area is home to the Tarastejärvi waste management centre and by 2016, a Tammervoima power plant will be constructed there. The power plant will consume approximately 150,000 tonnes of mixed waste per year. This amount of waste will produce 310 GWh of district heat and 90 GWh of electricity to serve the needs of Tampere homes. The plan is to build a hub for the environmental industry in the area.

The area is intended to be used for: Heavy industry, recycling and environmental industry, waste management.

The city plan is underway, and some 10 hectares of new plots will be available in 2014. Enquire after available plots and business premises.

A media hub is planned for Tohloppi, where the Finnish Broadcasting Company YLE acts as the driving force. The goal is to create an ecosystem of the creative fields, a growing hub of enterprises and education providers with several media operators acting under it. YLE, which is currently renewing and extending its operations, is also one possible platform and partner for businesses locating in the area.

The Mediapolis area is located in the beautiful landscapes of Lake Tohloppijärvi. It is some 8.6 hectares in size and has about 43,000 m² of permitted building rights. Of this, about 15,000 m² is yet to be constructed. The buildings in the area are owned by Technopolis Oyj.

In accordance with the approved city plan, the new business premise and plot area will be located along Ruskontie on the south side of Tampere. The City of Tampere has a 3-hectare business location mainly suitable for office space (20-30,000 m²) available immediately.

The area is intended to be used for: Office space and business construction. Enquire after available plots and business premises.

The Hatanpää–Nekala area is an old area for industry and commerce, particularly the car trade. In addition, many R&D operations are centred in the area.

Hervanta is the largest centre of office space outside the centre of Tampere where many production premises and the Hermia Technology Centre, among others, are located. The Hermia area includes about 120,000 m2 of office space and is home to some 160-200 companies and organisations. The area employs about 4,000 people. A number of small, start-up businesses operate in Hermia, but the area is also home to many international companies. The local business operations benefit from the proximity of the Tampere University of Technology, universities of applied sciences and the Technical Research Centre of Finland. The area also includes the most significant cluster of ICT technology and services in the region, the most pivotal such operator in the area being Nokia Oyj/Microsoft. The surrounding area includes plenty of office space and production facilities. It is also possible to construct new properties for office space and technological production in the Hermia area.

The City of Tampere owns some 76,500 m² of untransferred building rights in the Hermia area. Enquire after available plots and business premises.

Kolmenkulma is a new business area focused on logistics, production and service provision in Tampere, Ylöjärvi and Nokia. Kolmenkulma is located along the western bypass road to Tampere. The connections to the area are excellent. In 2005, the cities of Tampere, Nokia and Ylöjärvi entered into regional co-operation and launched a large-scale business area project. As a result, the Kolmenkulma business area, the largest business area in the region, was established. The area covers more than 600 hectares.

The name of the area, ’three corners’, refers to its location at the intersection of three highways and three municipalities.

Together with the business areas that are already constructed, Kolmenkulma forms a business hub of more than 850 hectares. The new area is expected to create more than 10,000 new jobs.

The area is intended to be used for: specialised stores, retail stores, service station operations, industry that produces no environmental disturbance, heavy industry, recycling and environmental industry and motor sports. The section to be built on the Tampere side will be located in the neighbourhoods of Myllypuro, Kalkku, Haukiluoma, Rahola and Tesoma.

These areas area known for their large industrial plants and logistics companies as well as their excellent regional accessibility. The area is partly separate from residential districts, which enables it to be used for heavy industry too. The area became more desirable when the ring road was completed and its desirability will grow even more as the Kolmenkulma business area develops nearby. The area includes 4 hectares of soft ground that has not been parcelled into plots. The area covers a total of 540 hectares and some 100 companies are located there.

More about this topic