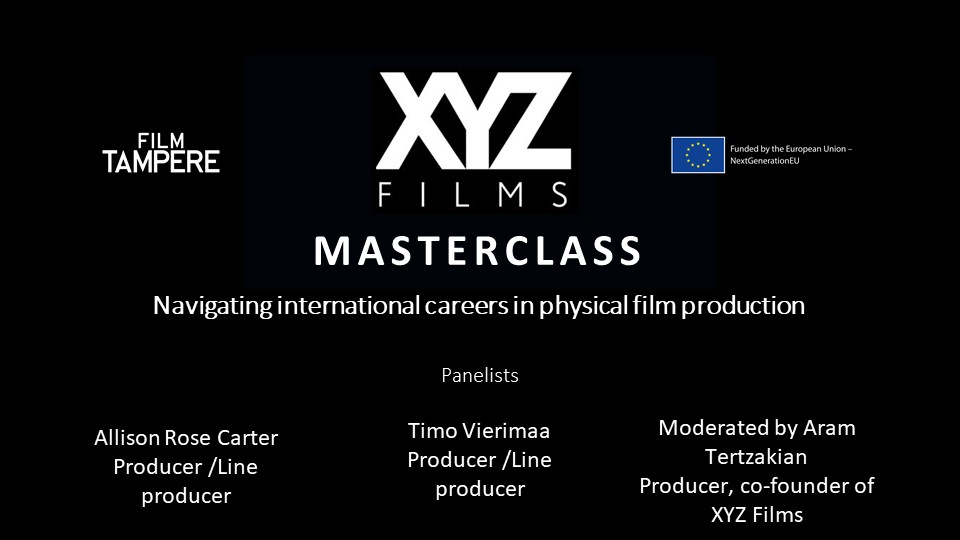 Film Tampere proudly presents the next masterclass in cooperation with XYZ Films: Navigating international careers in physical film production, with a focus on 1st AD, line producer, and production manager roles. The masterclass will be held Thursday June 9th at 7pm Finland Time / 9am LA Time remotely via Zoom.

The masterclass is funded by the European Union – NextGenerationEU and is open to all film and TV professionals and students.

The masterclass is moderated by Aram Tertzakian, co-founder of Los Angeles based XYZ Films. XYZ Films is an integrated content company whose mission is to empower visionary storytellers from every corner of the planet. As an independent studio, the company is uniquely suited to identify talented filmmakers and bring their stories to life.

The panelists are:
Allison Rose Carter, Producer from the United States. Allison Rose Carter has produced over 20 feature films. She got her start on Eyad Zahra’s The Taqwacores, which had its premiere at the inaugural NEXT category at the 2010 Sundance Film Festival. Her most recent feature films include Josephine Decker’s The Sky is Everywhere, Billy Porter’s Anything’s Possible, and Daniels’ Everything Everywhere All At Once. She works all over the world, but resides in Brooklyn, NY.

Timo Vierimaa, Producer from Finland. Timo is a producer and a founder of the production service company Film Service Finland. He also produces original content for the production company Funfar. Timo has focused on international co-productions and in the past 14 years, he has worked as a producer/line producer/production manager on projects co-produced with all Nordic countries, US, China, Germany, Canada, France, Italy and Belgium. His most recent credits include Dual (2022), starring Karen Gillan and Aaron Paul, and What Remains (2022), starring Gustav and Stellan Skargsård with Andrea Riseborough.

The masterclass will also be available to view afterwards. The link to the recording will only be shared to those who have signed up, so remember to do so even if you are unable to attend live. The Zoom link to the session will be sent to all sign-up addresses via email one day prior to the event, as well as right before it begins. Please make sure you have an updated version of Zoom.

You can send pre-questions to the speakers upon registration. Note that by sending questions in advance, you will get the most out of a masterclass lecture that is worth taking advantage of!
This masterclass is part of a business and public sector growth contract project currently being completed in the Finnish audiovisual sector. Read more about the growth agreement project in Finnish here #kasvusopimus