In case of a chemical accident in the city centre, how could authorities be better prepared, ensuring swift response? Smart Urban Security and Event Resilience Project (SURE) and Aeromon carried out an airborne agile experiment in Tampere, Finland.

Aeromon provides mobile, real-time emission monitoring services. The company makes its measurements in an agile way, by walk if necessary – or quite often by flight. Aeromon loads a drone with necessary sensors and can then measure airborne concentrations in 3D.

Aeromon was founded in Finland in 2014. Their technology was first used in maritime emission monitoring, and has then expanded into several land-based industries. They became involved in the SURE project when Insta, a technology partner of SURE, suggested so.

– We have a long history of collaborating with Insta, and we’ve been looking for a project where we could really test our synergies. A SURE agile experiment seemed like a fine opportunity, says Aeromon Director of R&D Matti Irjala.

The SURE project has done their groundwork thoroughly to assess risks in Tampere. A railroad yard is situated in the centre of Tampere, and transporting chemicals through it is a clear safety risk. If an accident happens, technology solutions may help manage the situation.

Aeromon’s first proposal was to simulate a scenario in which a toxic gas cloud is spreading from the railroad yard towards Tampere Central Square. Due to time constraints, the company settled upon simulating a smoke plume emanating from a fire in the nearby Ratina Stadium.

– Aeromon calculated the smoke dispersion model and estimation just as we would have done with the toxic gas cloud, to see the impact it would have had in the area, says Irjala.

When quick response is required

Normally, Aeromon reports are read by people who have plenty of time to absorb the information. Emergencies require another kind of approach: quick decisions based on massive data flows.

– We paid special attention to data visualisations, so that one could see at a glance what is going on and how it is developing. There was an emergency exercise in Tampere, and the participants thought our models increased the situational understanding, Irjala says.

At the same time, Aeromon was also able to practise integration into Insta Blue Aware platform. 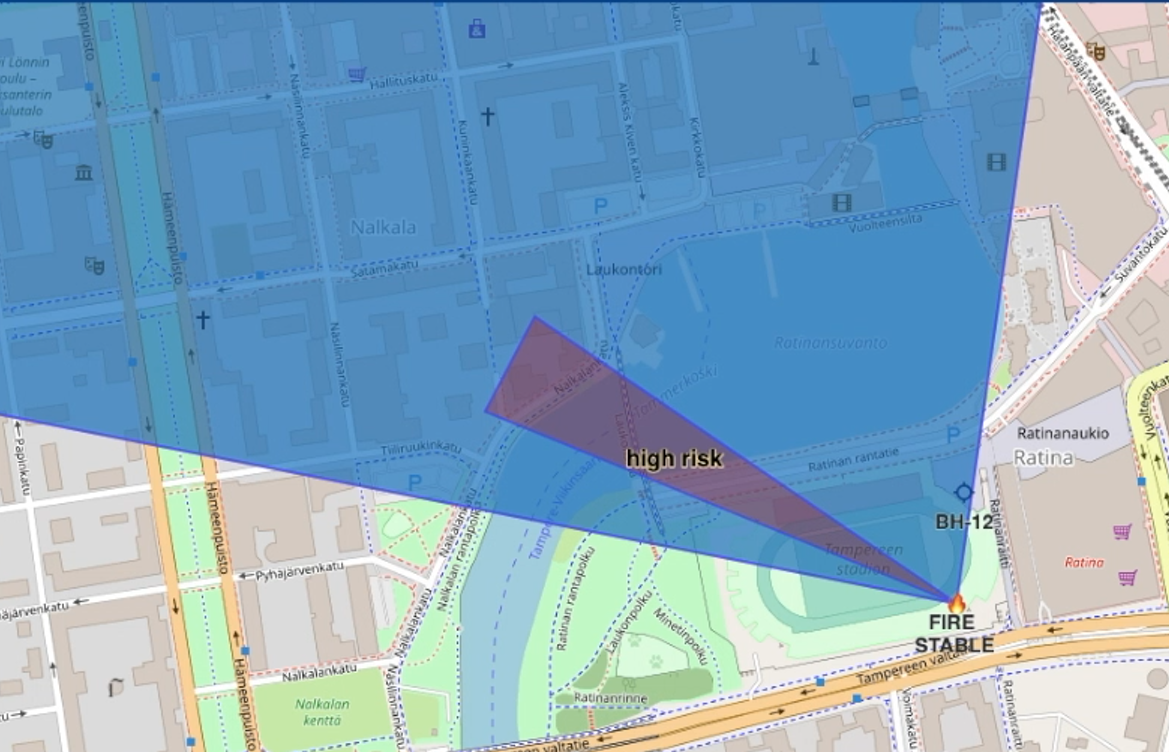 From Aeromon’s point of view, the SURE agile experiment was useful and reasonably sized. With only a small contribution the company was able to showcase the authorities what modern technologies and devices are capable of. In any case, industrial dispersion models are one of Aeromon’s key areas of development.

– The safety solutions depend on how the rescue authorities will start adopting the technologies. We are ready to join their projects, says Irjala.

The SURE project is aiming to integrate data, gathered from various sensors, into situational awareness. “A flying sensor” is an interesting approach for the project.

– Drones and drone-mounted sensors will be used increasingly for city safety and security. To fully harness the power of airborne devices, we should also examine how they could be shared between multiple authorities, instead of each one having its own devices, says Petri Koskinen, Senior Business Advisor, safety and security, of Business Tampere.

The experiment was a part of the SURE project (Smart Urban Security and Event Resilience). The project was granted 3,2 million euros from the Urban Innovative Actions, an ERDF-funded initiative of the European Commission.

Business Tampere is responsible for the upscaling of solutions, and provides a framework in which the technology providers can run the experiments.